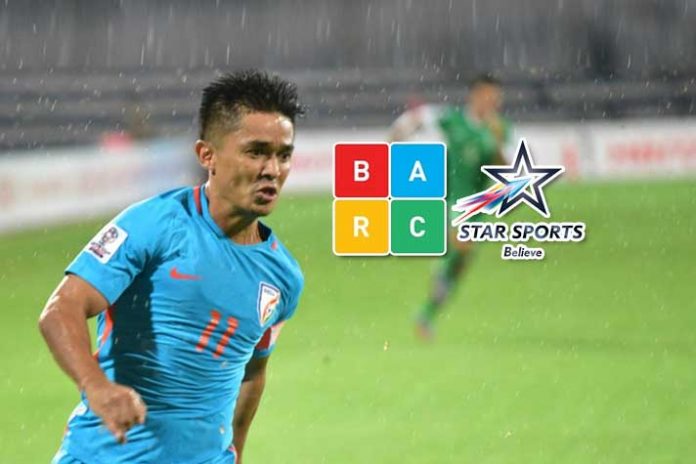 Sunil Chettri’s emotional plea did not just result in a houseful at the Mumbai Football Arena stadium with frenzied fans roaring and cheering for the ‘blue tigers.’ It also did exceptionally well in striking a chord with the broadcast audiences.

After a dismal attendance of 2,569 for the first match with Chinese Taipei, Indian captain Sunil Chhetri had uploaded a personal video on his Twitter handle and Instagram account to plead the fans to attend matches and show support to the team.

Such was the impact of the Chettri’s social media appeal that the live telecast of the inaugural edition of the Hero Intercontinental Cup (2018) is the most watched sports genre program in the Week 23 BARC Ratings released on Thursday.

In the inaugural tie, India had opened their campaign with a 5-0 crushing victory against Chinese Taipei. To teams and players utter disappoint, the stands in the stadium was virtually empty.

Thereafter, a disappointed Indian football icon and record goal scorer Chhetri was made to make the personal appeal, which worked wonders for the sport. The India vs Kenya sold-out match on June 4 and impressive BARC ratings are the testimony to the magic of Chhetri’s plea. 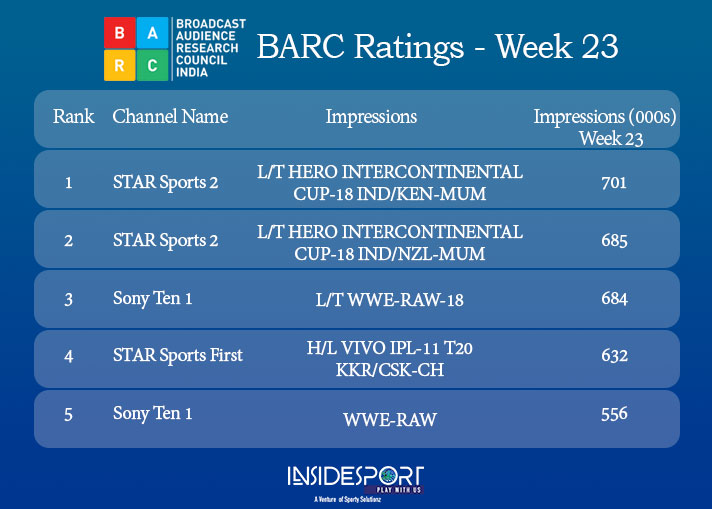 India’s blitzkrieg in the inaugural edition of the event has pushed the live telecast of WWE Raw in the week 23 list to the third sport, a program which normally enjoys the top spots in the absence of any live cricket.

Chhetri’s passionate and heartfelt plea on the eve of June 4 tie against Kenya got empathetic response from various sports and Bollywood celebrities, including Indian cricket captain Virat Kohli, cricket legend Sachin Tendulkar, tennis diva Sania Mirza and Bollywood veteran Anupam Kher etc. among others. The game was sold out before the match day.

The BARC ratings for the Final match in which India defeated Kenya yet again for the Hero Intercontinental Cup inaugural title will be released next week. It will be interesting to see if it reveals unprecedented TV audience numbers in the history of Indian football.