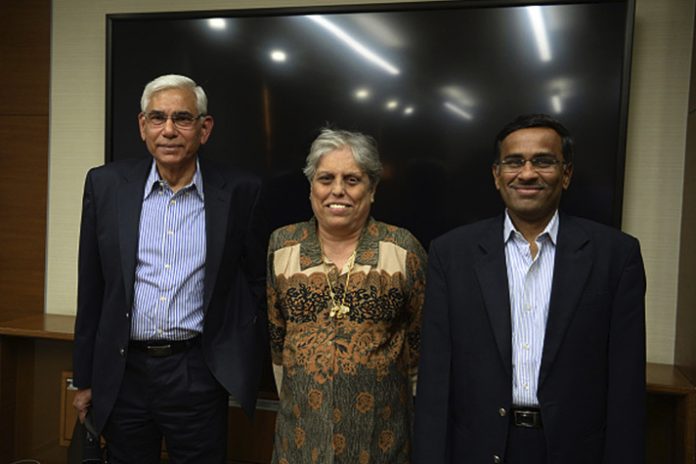 The Board of Control for Cricket in India’s Committee of Administrators, headed by Vinod Rai, might take the Supreme Court nod and avoid the board body to implement a relaxed FTP and players’ salary revisions.

The CoA has agreed in principle with the Virat Kohli, MS Dhoni and Ravi Shastri on a four-year future tours programme to limit Indian cricket team’s international match days excluding the International Cricket Council events to a maximum of 90 per annum.

Better remuneration for all players with an incentive for the ‘Test specialists’ like Cheteshwar Pujara was the other major point agreed upon as BCCI’s Committee of Administrators’ chairman  Vinod Rai met captain Kohli, teams senior most member Dhoni and head coach Shastri in the Capital ahead of the third and final Test against the visiting Sri Lankans.

The new FTP and revised remuneration package for the players are likely to be announced before India’s tour of South Africa gets underway next month. The CoA in a bid to avoid any confrontation in the BCCI is considering to bypass the BCCI general body to enforce the amendments and seek an approval from the Supreme Court to enforce changes.

“The CoA is mulling on taking the matter directly to the court (for approval). If the BCCI becomes obstructive (to the changes), the matter will directly be taken to the court,” a CoA source has told Indian Express.

The CoA has focused on having more balanced itineraries for the Indian team in the wake of Kohli’s objection to a cramped schedule which has left the team with lack of preparation time for the challenges on the South Africa tour.

“The meeting was very fruitful. The cricketers appreciated the fact that for the first time they were being heard. We will come up with the next four year’s FTP, limiting the number of match days to 83-85, maximum 90, per year apart from the ICC events. We have decided to have a 15-day gap both before and after the IPL. Early burnouts of players will occur if they keep playing matches (non-stop). You must have noticed that stadiums in Kolkata and Nagpur were empty (for the ongoing Test series against Sri Lanka). So besides players fatigue, we have also considered spectators fatigue,” Rai had told The Indian Express.

Kohli had criticised the cramped schedule, saying: “We very easily assess the team when going abroad but we don’t look at how many days we have got to prepare before we go to a particular place to play.”

The series against Sri Lanka finishes on December 24 and the team leaves for South Africa on December 27 to play three Tests, six ODIs and three T20 Internationals.