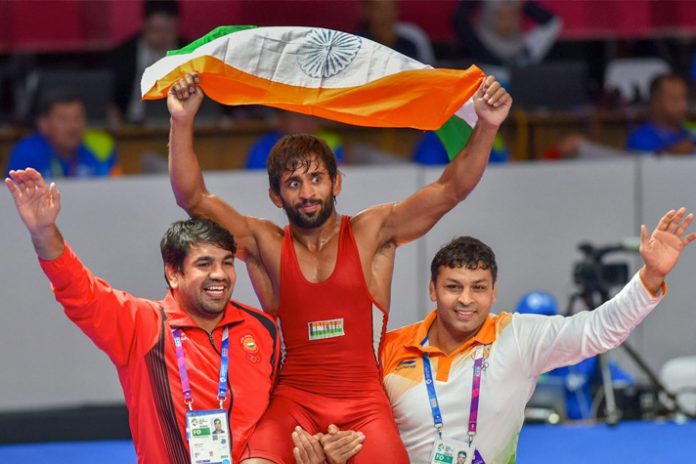 Bajrang Punia had several commitments to fulfil and a promise for himself to start the journey for his most cherished dream on a golden note.

The promises he made to his personal and wrestling sponsors are fulfilled. At the personal level, the 65 kg men’s freestyle gold is not a mission accomplished. It rather is the beginning in the right earnest for the biggest goal of his career – a gold medal at the 2020 Tokyo Olympic Games.

The 25-year-old Haryana wrestler has made that cherished dream his personal identity. Bajrang’s every act and emotion is originated from and flows towards the identity he has been aiming for the lifetime.

A champion wrestler at the Asian Games stage, where the challenge comes from the sport’s traditional powerhouses like Mongolia, China, Iran and the erstwhile Russian Union States, would go gaga over what Bajrang had achieved in Jakarta yesterday (Sunday) – winning four of his three bouts via technical superiority, a clear 10-point lead over his opponent, and then clinching the gold by staying in the lead in the exciting final.

On a day when the Indian cricket team had demolished hosts, England is a single session of the Trent Bridge Test, media in the cricket crazy nation has paid most attention to Bajrang’s feat in the 18th Asian Games. The pictures of Bajrang’s Asian Games triumph are spread from page one to the first headlines on the sports pages across national newspapers. 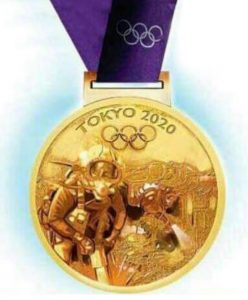 However, the wrestler himself has spared the most precious personal picture frames for his ultimate glory – the Gold medal at the 2020 Tokyo Olympic Games. His Whatsapp display picture for two years is a graphic image of a Tokyo 2020 Olympics gold medal. Bajrang did not change that picture after the Jakarta success even when his victory lap with the Tricolour in the Asian Games 2018 wrestling arena has become the picture of the day for the Indian sports lovers and a host of Bajrang fans.

Did not Bajrang feel like to replace that WhatsApp DP with the image to acknowledge what has been the biggest achievement of his career? “Kaise change ho sakati hai. Target hee wo (the Tokyo gold) hai (How can it change this when that is my target),” Bajrang told insidesport.co from Jakarta. “My coach Ramfal and mentor Yogeshwar Datt had made me realise about my career goal two years ago. Ever since that has been my identity.”

Bajrang also showered overwhelming praise for Yogeshwar and Ramfal, who has also been the coach of Sushil Kumar and Yogeshwar – the two Olympic medallist wrestlers from India.

Bajrang, before leaving for Jakarta had promised to reciprocate the gesture of Wrestling Federation of India principal sponsors Tata Motors Commercial Vehicles Unit and his personal supporters Olympic Gold Quest with the Asiad gold. He is upbeat to have fulfilled that promise. “We always have a duty towards our supporters and sponsors. I am glad to win for all who have been my partners in this journey. I am also thankful to the Haryana State government for their support and the award (₹ 3 crore) they have announced. Any recognition, any support motivates you to improve and perform better.

“Haryana State had always been forthcoming to promote and support its athletes. That is one major factor that athletes from Haryana have been excelling at all levels.

“When you see your wrestling federation, our president Brij Bhushan Sharan jee, federation partners Tata Motors and Sporty Solutionz, my personal supporters OGQ and government through TOPS scheme doing so much for you, then you just think about the goal for which they are standing by you,” added Bajrang.

It is not that the Haryana wrestler is not valuing his Asian Games success. “This has been the biggest achievement of my career. Asian Games for an India wrestler is only next to the Olympics. Khushi to bahut hai (I am very happy about it), says Bajrang.

Bajrang now has won six golds in his past eight international outings. The other two have been podium finishes, too. The last and the most precious nation has not just given the champion a stronger resolve for his ultimate glory, but also a hope to the nation. Tokyo 2020 is a mere two years away.