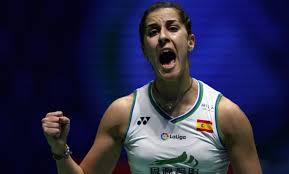 Olympic gold medallist Carolina Marin has said it will take some time before she can reach here previous levels due to the implications put forward by the coronavirus pandemic.

In normal circumstances, the Spaniard would currently be gearing herself up to defend her crown at the Tokyo Games but due to the COVID-19 crisis, the showpiece event has been pushed to next year.

“It will take some time before I go full steam but once the tournaments start, time shall fly,” she added.The multi-national event was initially set to be hosted in July this year but due to coronavirus pandemic, it will now take place from July 23 till August 8.

Marin revealed she has already set her sights on winning another medal at the Tokyo Games after realising her dream in Rio de.

“Winning Olympics was a dream that I and my coach had seen and my entire team had put together unbelievable hard work for the four years to get to that gold in Rio. Now my goal is set again,” she said