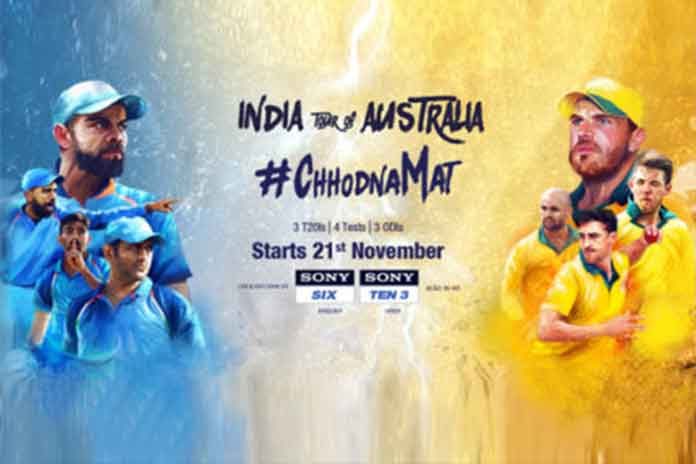 Virat Kohli-led Team India launches their campaign with the T20 International tomorrow (Wednesday) at the Gabba Brisbane. The live and exclusive broadcaster in India Sony Pictures Network have released elaborate plans as Men in Blue tour Down Under for three T20Is, 4 Tests and 3 ODIs over the next two months.

For the year ending high-octane cricket series between India and Australia, Sony Pictures Networks India has engaged a host of top Indian and Australian cricketers to present live and analyse the action.

The series, with three T20s, four Tests and three ODIs, is highly anticipated by fans across the globe as the clashes between the two leading teams have always been intense.

The broadcaster, to enhance the value of its hottest cricket property for the year, will come with its flagship show Extraaa Innings with a new look and set design featuring an unrivalled set of expert panellists for the series.

All the matches will be telecast Live with English and Hindi commentaries to ensure an unparalleled viewing experience for viewers across India.

Following the astounding success of the FIFA World Cup and UEFA Champions League second screen experience, SPN brings back an interactive digital experience for the world’s biggest bilateral series. Viewers watching the series on SPN’s premium OTT platform, SonyLIV, can access “Extraaa Innings” for exclusive content and increased interactivity. The features include a host of predictor games, quizzes, team selector game, trivia, emotion-based selfie filter and stats – all designed to keep the fans engaged. One of the features on “Extraaa Innings”, the “Aggression Meter”, will be displayed on-air during the broadcast through which fans, based on the match, can express their emotional state during the series.

“Cricket is more than just a sport; it is an emotional experience for Indians. Being the one-stop destination for international bilateral series, with rights to eight cricket boards, we are always looking for ways to elevate this experience. The superb line-up of panellists and commentators will give our viewers a holistic perspective on the matches. Along with that, our second screen initiative – Extraaa Innings, will ensure that the fans have a more immersive experience during the series,” said Rajesh Kaul, Chief Revenue Officer Distribution and Head – Sports, Sony Pictures Networks India .