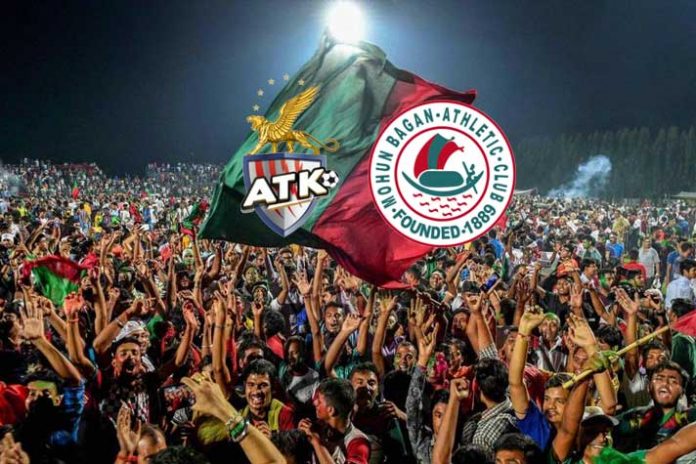 While the All India Football Federation has hailed the move as the way forward for the sport in the country, another Kolkata giants East Bengal have taken a dig at the deal with their statement that the club, which will complete 100 years of its existence in August this year, will never be up for “sale”.

Indian Super League club ATK on Friday has announced the acquisition of 80% stake in the country’s oldest running football club. ATK and Mohun Bagan as part of the deal will play the ISL next season as a joint entity ATK-Mohun Bagan.

ATK has committed a ₹ 60 crore annual investment for running the ATK-Mohun Bagan.

All India Football Federation fully committed to the growth of ISL even at the cost of I-League, which was relegated from and deprived of the status of India’s premier football league, has hailed the move  as one of the most historic developments in the country’s football.

“I congratulate the fans of legendary Mohun Bagan club and Hero ISL club ATK on the merger. I am sure officials of both clubs have kept the best interests of fans and larger interest of Indian football in mind while arriving at a well thought out decision. When tradition and legacy is backed by corporate backing, magic can be created,” AIFF President Praful Patel said.

“I am certain this is going to be one of the most historic developments in the annals of Indian footballing history. I commend the authorities of both clubs for displaying vision, I congratulate both sets of fans and wish them a happy and prosperous ‘marriage’,” AIFF General Secretary Kushal Das said.

Meanwhile, Bagan players have expressed mixed emotions even as the club’s assistant general secretary Srinjoy Bose has said that the association in no way will have a negative impact on the century-old club’s identity.

“It is clearly mentioned (in the MoU) that we are a supporter-based club… It’s very clearly understood between us and mentioned that club logo and colours will be preserved and the essence won’t be disturbed. It’s very clear,” Bose said.

“Mohun Bagan can merge with ATK we have no problem with that. But the name and the logo of the club should be remain the same on the jersey. It’s a demand as a fan,” said a Mohun Bagan supporter waving the green-and-maroon jersey.

Will Mohun Bagan lose its identity for ticket to ISL?

But there were fans who seemed worried about the merger and East Bengal fan club, “East Bengal the real power”, also expressed anguish.

“When we fought for #OneNationOneLeague, this is not what we meant… But, thanks @Mohun_Bagan for the rivalry and the memories. The Red and Gold will keep the fight on in #Maidan,” East Bengal fan club tweeted.

“The charm will go forever. A #MohunBagan fan, who is a good friend of mine, is bragging that #ATK choose Bagan over #EastBengal. I don’t know what to say! Is there any true Bagan fan happy with such a deal that involves ownership of the club? Pinch me!,” tweeted another fan.

But the Mohun Bagan top official justified the move saying that the fans would go on to realise that it’s for the future. “People will say many things. When we roped in Cheema Okorie for the first time in the 1990s, people had said it would hurt the reputation. But now supporters are crazy about foreign recruits.

“When we struck a deal with liquor giants McDowell, we had drawn a lot of flak but if you see they ran the show in Indian football for 15 years.”

Meanwhile, Indian football icon Bhaichung Bhutia has hailed the merger of Mohun Bagan and ATK but said he was not happy with the merged club to be named as ATK-Mohun Bagan from next season.

“Why would you want to have its name ATK-Mohun Bagan? That does not go well. That branding has to be done properly. The deal was all about buying the identity and history. With that history, you will have millions of fans across the world. That you will have to keep in mind,” Bhutia said.

Bhutia who has played for Mohun Bagan for four seasons and led the club as well, pleaded that the RP Sanjiv Goenka Group must ensure to keep green-and-maroon’s rich identity intact.

The announcement has come three days before the I-League derby and Bose said this would no way affect the high-voltage clash.