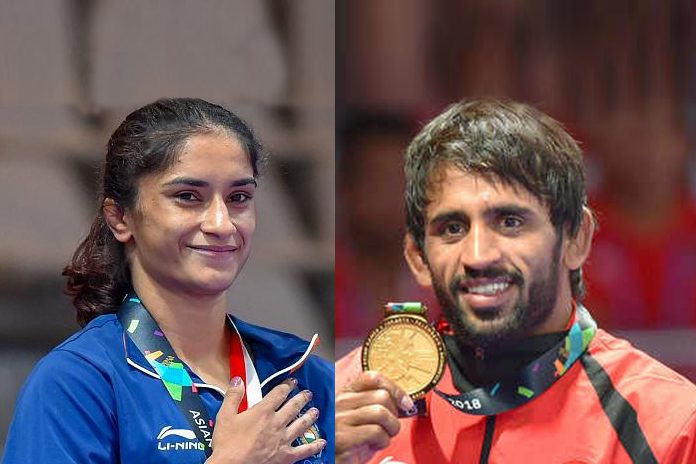 Champion wrestlers Bajrang Punia and Vinesh Phogat are in contention for the Rajiv Gandhi Khel Ratna award, the country’s highest sporting honour, after notching up gold medals in this year’s Commonwealth Games and the ongoing Asian Games.

“Bajrang has filled his form for the Khel Ratna Award through the federation and he is a deserving candidate for the award after his brilliant performances in CWG and Asiad. We don’t know whether Vinesh has filled the form on her own or not but she can be considered by the Ministry,” a WFI official told PTI.

“Both Bajrang and Vinesh are strong contenders for the Khel Ratna Award and it won’t be surprise for us if both win.”

A Sports Ministry official too said that Bajrang and Vinesh are strong contenders for the award along with already-nominated India cricket captain Virat Kohli and star javelin thrower Neeraj Chopra, who too is a strong contender after winning back-to-back golds in Gold Coast and Jakarta.

Chopra, who shot to limelight after winning a gold in the World Junior Championships in 2016, has also been nominated for the Arjuna Award and was the flagbearer of the Indian contingent during the opening ceremony of the ongoing Asian Games. “Bajrang and Vinesh’s performances in both the Commonwealth and Asian Games have been exceptional, especially in the Asian Games where the level of competition in wrestling is very high,” the Ministry official is quoted as saying.

“Both Bajrang and Vinesh’s names were not in the entries received by the Ministry by April 30 cut-off date but we will have a review meeting of the Asian Games medal winners soon and the Ministry can recommend some eligible candidates to the existing list to the selection committee.

“Not just Bajrang and Vinesh, there were many other great performances from our athletes in the Asian Games and they will be considered as well,” the official added. Vinesh, a 2016 Arjuna Awardee, achieved a rare feat in Jakarta when she became the first Indian woman wrestler to win a gold in the Asian Games. She had earlier won a bronze medal in the 2014 Incheon Asiad.

Vinesh is also a two-time Commonwealth Games gold-medallist, having won back-to-back titles in 2014 and 2018. Bajrang too won gold medals in Gold Coast and Asiad this year. He also has a World Championship bronze in 2013 besides silver medals in the 2014 Incheon Asian Games and Glasgow CWG.

The highest number of athletes to be conferred the country’s highest sporting award in a calender year is four when PV Sindhu, Sakshi Malik, Dipa Karmakar and Jitu Rai received the honour in 2016. The Arjuna Award, next in the pecking order, has been given to a maximum of 17 athletes in a single year so far and the number might also swell this time around.