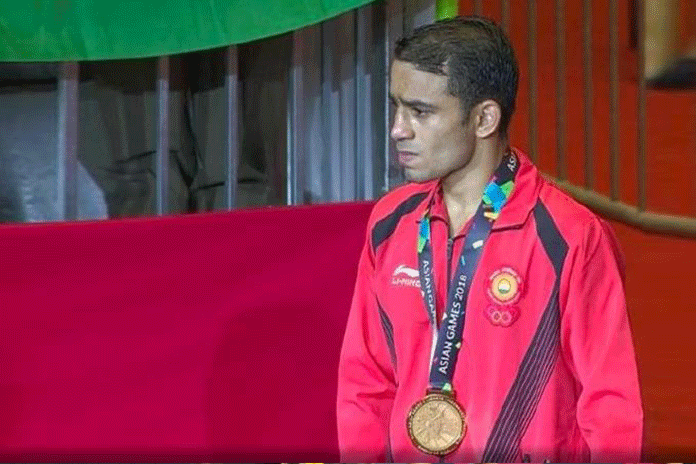 India’s boxer Amit Panghal, who won Asian Games gold in Jakarta, was nominated for this year’s Arjuna awards by the Boxing Federation of India on Tuesday.

Amit, who claimed the light flyweight (49kg) category gold after defeating reigning Olympic champion Hasanboy Dusmatov of Uzbekistan in the Asiad final, joined Sonia Lather and Gaurav Bidhuri in the list of boxing nominees for the second highest sporting honour after the Khel Ratna.

There were doubts on whether he would be considered given a positive dope test back in 2012, for which he served a one-year ban.

However, given the fact that he is done with the punishment for the “inadvertent” violation and that it happened when he was competing at the youth level, the BFI decided to send his name to the Ministry.

“It happened when I was just a kid who knew nothing. I was a teenager and had come to my village after being diagnosed with chicken pox, there was probably something in the medicine that the doctor gave me,” Panghal said on his doping ban.

That apart, the youngster from Haryana’s Rohtak is enjoying a breakthrough year, starting with a bronze in the Asian Championships in May 2017. He followed it up by making the quarter-finals in just his debut World Championships, losing a close contest to Dusmatov in August.

Just about six months later, Amit went on to claim a gold medal in the India Open in Delhi and the prestigious Strandja Memorial Tournament in Bulgaria. A silver medal in the Commonwealth Games put him in the big league before he outshone his teammates with a gold in the Asian Games in Jakarta.

“It has been a dream, I am still living it. Hopefully the Arjuna award will be the icing on the cake,” said Panghal.

Among the boxing nominees, he faces competition from Sonia, a world and Asian silver-medallist and Bidhuri, only the fourth Indian boxer ever to get a World Championship medal.