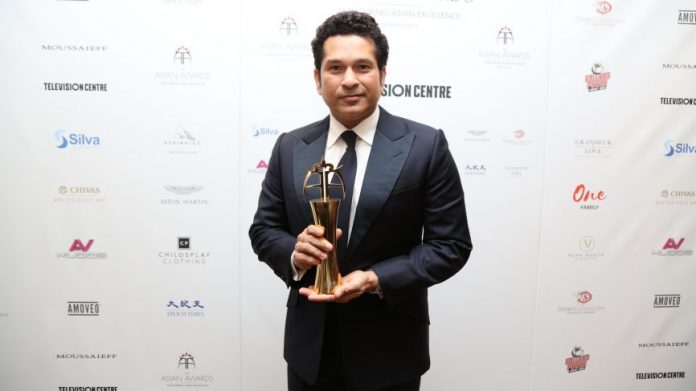 The master blaster has been honoured with yet another award to add to his gallery. Sachin attended The Asian Awards ceremony on Friday at the London Hilton on Park Lane. The ceremony celebrates excellence in the global Asian community. And this time it was Sachin who was conferred with the Fellowship award at The Asian Awards.

India’s cricket icon Sachin Tendulkar plans to support charities and various initiatives to help the under-privileged people in the second innings of his life. Tendulkar made the remarks while receiving the Fellowship Award. He said playing for India for 24 years was a memorable journey and winning the world cup was icing on the cake.

Tendulkar’s journey to international stardom through cricket is an interesting tale told through his much-awaited biographical drama, “Sachin: A Billion Dreams”. Produced by Ravi Bhagchandka of 200 Not Out and Shrikant Bhasi of Carnival Motion Pictures, and helmed by Emmy-nominated James Erskine, the film is releasing on May 26.

The Asian Awards also recognised late actor Om Puri’s outstanding achievement in cinema, and child actor Sunny Pawar of “Lion” fame as a rising star. Sachin called on stage 8-year-old Hollywood star Sunny Pawar and said, “When I was his age, my dream was to play cricket for India.”

Past awardees of the Fellowship honour include Indian musician Ravi Shankar, and actors Jackie Chan and Ben Kingsley.