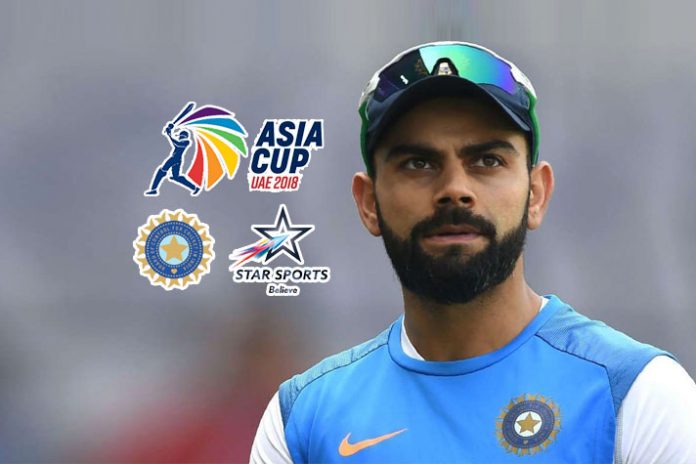 Virat Kohli’s absence seems to be yet again dominating cricket’s biggest exciting factor – an India-Pakistan cricket match. The Board of Control for Cricket in India and the Asian Cricket Council are involved in an argument over Virat Kohli’s absence in the Asia Cup, which started in the UAE on Saturday, September 15.

When an average cricket fan has been aggressively discussing the prospects of an India-Pakistan match, a communication between the Star Sport, ACC and the BCCI has for a while shifted the focus to the Virat Kohli factor. Even as those 100-over duels between India and Pakistan will be the biggest factor – commercially and sportingly – of the Asia Cup competition in Dubai and Abu Dhabi, the broadcast has raised a legitimate concern over a premium value quotient missing from the tournament.

Host broadcaster Star Sports had expressed its displeasure on Kohli’s absence, claiming that the broadcasters profit and loss is affected as Indian cricket’s biggest brand icon is not playing in the tournament.

Star Sports had written an email to the ACC Game Development Manager Thusith Perera, stating that “In our view, the announcement of the absence of one of world’s best batsmen from the Asia Cup, only 15 days before the commencement of the Asia Cup, is a severe dent to us (event broadcaster) and will severely impact our ability to monetise and generate revenue for the tournament.”

As the continental event organiser ACC took note of the concern raised by Star Sports, the biggest funding source for the event, the BCCI that the broadcasters or the ACC cannot interfere in the Indian team selection.

The BCCI has stated that the team selection is their sole and absolute prerogative. “Please note that selection of best available team for participation in a tournament is the sole prerogative of BCCI,” BCCI CEO Rahul Johri replied to Perera, adds PTI.

“It is not open for ACC or its broadcaster to insist on selection of any particular player and/or to question the expertise of any selection committee as to which is the best available team for particular tournament,” Johri further wrote.

MSK Prasad, chairman of the selection committee had confirmed that Kohli had been rested for the Asia Cup.