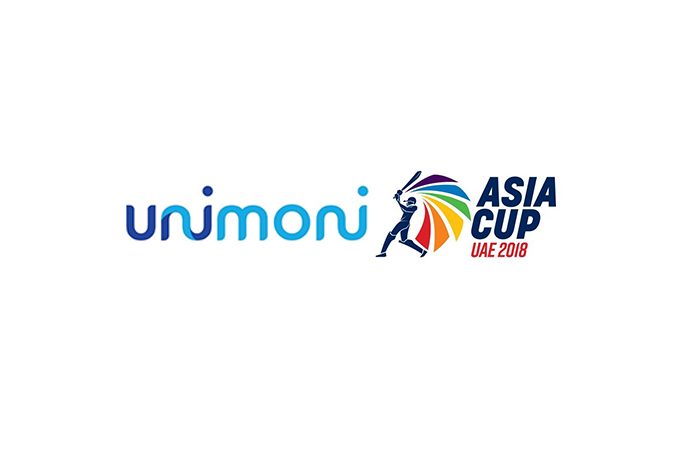 Global financial service brand Unimoni will be the title sponsor for the 2018 Asia Cup Cricket Championship.

Unimoni, a global financial services brand, has taken over the title sponsorship for this year’s Asia Cup tournament, which will commence from September 15th, 2018 in the UAE.

Unimoni is a category-leading NBFC in India with offerings across credit solutions, foreign exchange, payments and wealth management. The tournament will now be called Unimoni Asia Cup 2018.

As reported by InsideSport in July, financial services company UAE Exchange was tipped to be engaged in negotiations to replace Chinese mobile handset brand Micromax as the title sponsor for the Asia Cup 2018.

UAE Exchange rebranded its global operation to Unimoni as part of Dubai-based company’s aspirations to strengthen its global presence and provide a broader spectrum of innovative financial services to its customers.

a leading global money transfer, foreign exchange and payment solutions brand, announced the rebranding of its Africa operations as “Unimoni”.

The 14 days cricketing extravaganza will see heavy weights India, Pakistan, Sri Lanka and Bangladesh, rising stars Afghanistan and a qualifier battle it out to be cricket’s crowned champions of the Indian sub-continent and Middle-East Asia.

Going by previous editions, the tournament is expected to generate great excitement among fans. The last edition had a viewership of nearly 300 million, which is expected to be easily surpassed this time.

Speaking on the partnership, Amit Saxena, MD and CEO, Unimoni India said, “Unimoni is delighted to gain the title sponsorship rights for this year’s Asia Cup conducted by ACC. Cricket is worshipped by a billion fans in India and it is a perfect platform for Unimoni to connect with them. We are confident, this will mark a beginning of a long-term association with the sport and its many forms.”

The tournament promises many exciting memories to the fans with the highlight being the much-awaited India vs Pakistan clash on 19th September. This edition also marks a return to the favorite ODI format for the bi-annual tournament.

The fact that India and Pakistan can meet thrice in less than two weeks makes this Asia Cup the most exciting cricket competition for the sub-continent.

India will be playing the Asia Cup 2018 without regular skipper Virat Kohli.