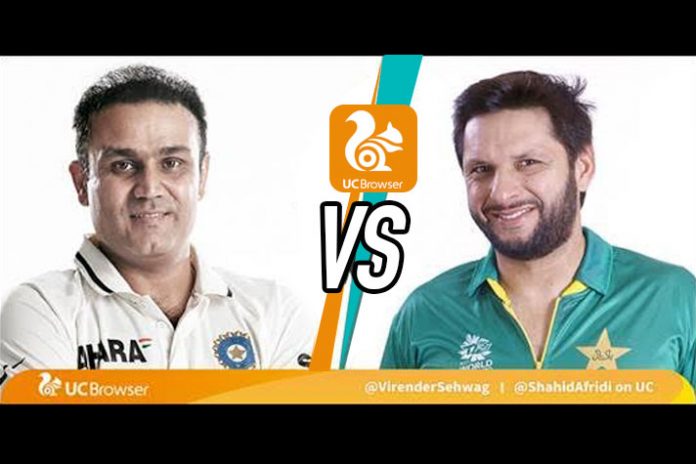 UC Browser, a leading mobile browser from Alibaba Group-owned UCWeb, has announced that it will host live streamed chats with legendary cricketers Virender Sehwag and Shahid Afridi during the highly anticipated Asia Cup 2018 cricket encounter between arch rivals India and Pakistan on September 19th at 9:30pm and September 23rd at 7:00pm, IST.

The move, aimed at bring the UC browser users close to their favourite cricket stars, will see the two cricket icons from the neighbouring Asian cricket giants indulge in conversation and discuss about the never-ending excitement everybody holds for the Indo-Pak cricket clash.

Anyone can send in their queries to the experts using the various hashtags as follows “#SehwagMeetsAfridi #IndiaVsPakistan #AsiaCup”.

India v/s Pakistan cricket matches are known amongst the greatest sporting rivalries in the world. Virender Sehwag and Shahid Afridi, known as on field enemies and off field friends, will discuss and debate over a host of topics in relevance with the game and share their personal match experiences with cricket fans on UC.

Cricket lovers can expect the two cricketers, known for their swashbuckling and aggressive on field performances during their playing days, to bring the same aggressive intent and passion on UC’s online platform. Also, they will be enjoying imitating each other with high spirits, trying tongue twisters and will speak in Punjabi and Pushto language and will recite some never heard dressing room secrets.

In the live chat experience the former cricketers will claim to put their team up in every possible way. It is undoubtedly that Afridi will talk about India’s defeat at ICC Champions Trophy last year and stating how Kohli’s absence can impact India’s performance whereas Sehwag is expected to defend the honor of India team. These remarkable comments will add more spice to this never ending debate and enthrall fans with their expert opinions.

Talking about the initiative, Damon Xi, General Manager of UCWeb India & Indonesia said, “We have always strived towards serving swift and smooth speed browsing with personalized content experience to our users. The India vs Pakistan clash is one of the biggest sporting rivalries in the game. Hosting a live chat during the India-Pakistan Asia Cup clash is an opportunity for us to celebrate with sports lovers and we believe to get longtime fans and newcomers come together to cheer for their favourite teams on this unique platform. ”

“Legendary players Sehwag and Afridi will not only participate in the chat session but also launch their official channels on UC Browser, to get closer with millions of UC users,” added DamonXi, “This is a way forward step to show our endeavor to provide rich content in every section based on users’ choices.”

Ashes 2021 LIVE: David Warner says, ‘When you are out of runs, you deserve some luck’