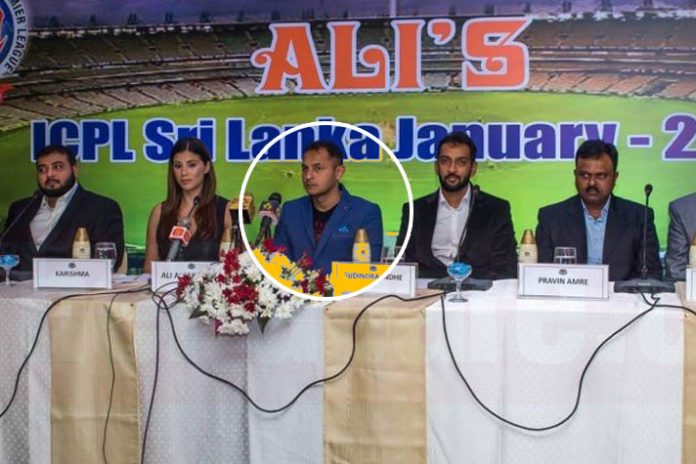 The ICPL, launched in Sri Lanka in 2016, was reportedly run by Thara’s travel company. He co-owns Kerala Kings in the Abu Dhabi T10 League, to be played between October 23 and November 3 this year. Kerala Kings have players like Kieron Pollard, Chris Gayle and Eoin Morgan in its ranks.

Thara manages “six leading teams playing matches” in different teams, national daily Indian Express has reported, referring to his profile on Kerala Kings’ website. He is a founder of Ali Travel & Tours” a travel company based in Bangalore. “After proving his mettle in his family’s export and import business of poppy seeds in India, he ventured into cricket,”  the profile reads.

A suspect under investigation in connection with betting in the Karnataka Premier League, Thara had reportedly approached several international players to work for him in different leagues. One player had opted out even before joining the ICPL committee. The daily had reported another anonymous India international as saying that he had turned down Thara’s offer to work for his KPL team.

“Nothing concrete, but the talk about him (Thara) among players I knew put me off. I thought it’s better if I stayed away,” the player had reportedly told the daily.

A majority of KPL players reportedly have expressed relief on Thara being picked by the police. Players had been suspicious about “fans” from Haryana visiting Hubli to watch KPL games. “I was thinking we aren’t that big; why would they come from Haryana? Definitely fishy; illegal betting and what not, we players have our doubts and would chat about it,” the paper quotes a player as saying.

The “sources” involved in the Tamil Nadu Premier League probe had reportedly also told the paper that bookies and match fixers take control of a franchise through an illegal deal with the team owner and are running “the team in such a way that they make windfall gain in betting”.

The Anti Corruption Unit sources say that one of the bookies confided to them that the coach was seen giving instructions to players on how many runs to score. It was also reported that “important persons in touch with bookies are spreading in different teams” in the TNPL league.

A similar allegation has surfaced in KPL as well, especially regarding Thara, who is alleged to have kept in contact with players across different teams. A member of the Belagavi Panthers told this newspaper about how Thara used to run a cricket academy in Bangalore and also reported to have owned a few cricket clubs. “He would organise tournaments before and made a few contacts through that.”

The joint commissioner of Bengaluru police Sandeep Patil said on Tuesday after arresting the owner: “Thara was in touch with a Dubai-based bookie.” The police have summoned 34 players from various teams for questioning.