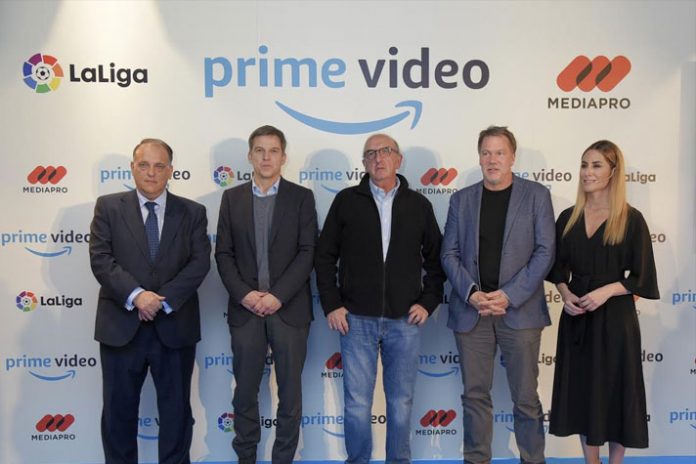 Amazon Prime Video today (Tuesday) has announced that it has greenlit Six Dreams, a brand new sports docu-series which follow six individuals throughout their 2017-2018 season of LaLiga, the globally followed Spanish football league that boasts star players and the world’s best clubs.

The show is produced in collaboration with MEDIAPRO and LaLiga, Amazon stated in Press release.

This brand new series will give Prime Video users an exclusive and unprecedented behind-the-scenes look at the famous Spanish football league following three players, two coaches and a club president as they navigate their way through their 2017/18 season.

Each participant comes from a different team and offers a unique insight into the daily challenges and struggles of professional football at its highest level. Whether they are up-and-coming names or veterans, all six participants will give Prime Video members an intimate look at who they are on and off-field and what it takes to be in one of the world’s most popular sport leagues.

“We are really excited to bring Six Dreams to our Prime Video Members around the world and give them unique access to the daily lives of some of the men and women who make LaLiga one of the greatest and most popular football leagues on the planet.” said Jay Marine, VP of Prime Video Europe.

“These men and women all have fascinating and unique stories and we are excited to work with LaLiga to bring these stories to our customers and football fans all over the world.”

“LaLiga is one of the world’s most exciting televised events, featuring the best players and the best clubs against the backdrop of great stadia, supported by passionate fans everywhere,” said Javier Tebas, president of LaLiga. “Amazon Prime Video will give viewers a unique, behind-the-scenes look at LaLiga, allowing new fans to discover the magic of the league and for existing fans to learn more. We’re excited Amazon Prime Video will present the series to its users around the globe.”

Jaume Roures, partner at MEDIAPRO said: “The best league in the world seen from within and through the eyes of six of its protagonists. Such a project needed the collaboration of LaLiga, MEDIAPRO and Amazon. No one could tell it better and spread it further. And it is immensely significant that in their first project in Spain, Amazon Prime Video has chosen LaLiga and MEDIAPRO as travel companions: quality content, on a growing global phenomenon and with the widest possible dissemination.”

The show joins Prime Video’s growing stable of Amazon Prime Original sports entertainment shows including Grand Prix Driver, that offers never-before-granted access to the inner workings of McLaren with Fernando Alonso as one of the protagonists, Manchester City docuseries, two series of All Or Nothing which follows the Arizona Cardinals and the Los Angeles Rams over an entire NFL season, New Zealand All Blacks, and live streaming of NFL Thursday Night Football and the ATP Next Gen Finals.

The series will launch exclusively on Prime Video in 2018, where its users can watch – at no additional cost as part of their Amazon Prime subscription – Prime Original exclusive series, among which The Grand Tour, The Man in the High Castle, American Gods, Transparent, Mozart in the Jungle, Bosch and Goliath. The service is available on all major Smart TV screens, Fire TV sticks, Fire tablets, Android TV, Android, iOS-powered phones, tablets, PS3, PS4 Sony game consoles, Xbox One X, and Xbox One Microsoft game consoles or online on PrimeVideo.com. The list of all compatible devices.