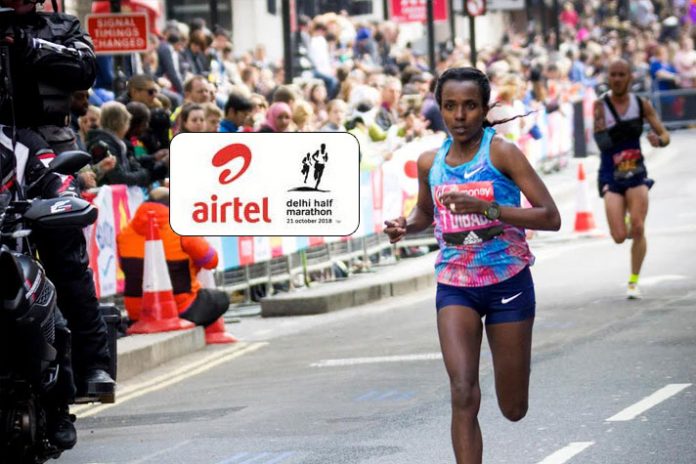 Three-time Olympic champion Tirunesh Diabba from Ethiopia has been added as the latest star to the galaxy of Airtel Delhi Half Marathon runners.

To say someone the “greatest in the world” in whatever the icon does may fuel many a debates. The term “greatest” is always subject to varying analysis and judgements but Tirunesh Dibaba of Ethiopia will pass many a scrutiny for the honour of being the world’s greatest female distance runner.

The Ethiopian legend, Tirunesh has won three Olympic Games gold medals and five world titles on the track to add to the four world cross country championships victories as a senior. She is also the current 5000-metre world record holder.

In the wake of her third place at last month’s Berlin Marathon, her third run under 2:19 over the classic distance in the last 18 months, she will be chasing two half marathon marks in Delhi, win which comes with a cheque for $27,000.

The Airtel Delhi Half Marathon course record stands at 66:54 since 2009 in the name of Kenya’s Mary Keitany. The presence of Tiruensh this year is posing a threat to the 9-year-old record.

“After Berlin, I felt good about myself and felt I could still run fast over the half marathon despite the short recovery time. I didn’t achieve my aims completely in Berlin, although I certainly have to be pleased with my performance, because I went there to win and run faster than my time of 2:18:55 so there is no better race than the Airtel Delhi Half Marathon to make my return to racing. I am excited about coming to India and I look forward to make my presence felt,” said the 33-year-old Tirunesh.

It will not actually be Tirunesh’s first race in India though. She had run a 5,000-metre race in Hyderabad back in 2003 when she was just 18 but, by her own admission, she can’t remember much about that trip so her outing in Delhi will have the sensation of being like her debut on Indian soil.

Another impressive addition to the men’s elite field for this year’s race is Tirunesh’s compatriot Hagos Gebrhiwet.  He may not have quite the same extensive medal collection as Tirunesh – although he can boast of two world championships 5,000m medals and a Rio 2016 Olympic Games 5,000m bronze medal – but will come to Delhi in fine form.