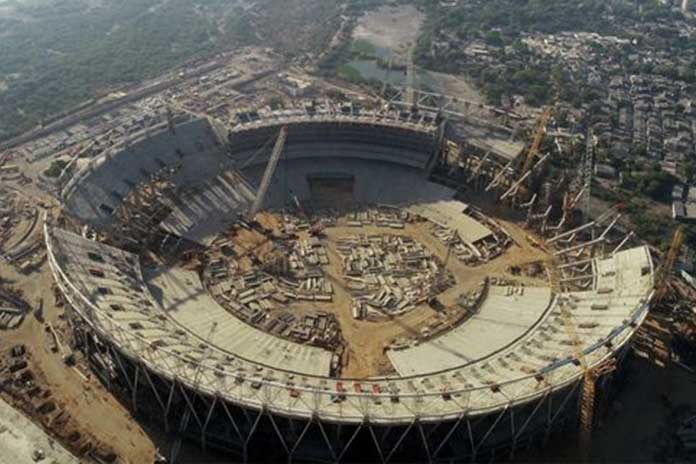 The State of Gujarat will now also have the largest cricket stadium in the world to compliment world’s largest statue of the architect of United India and country’s former deputy chief minister.

The picturesque stadium that came into existence in 1982 on the banks of Sabarmati River across 50 acres of plot got its expansion plans in execution mode in 2015. The demolition to expand the 49,000-seat stadium by more than double has started three years ago. The construction contract to Larson and Toubro was allotted the next year.

The stadium expected to be ready with 0.11 million seats, parking lots for 3,000 cars and 10,000 motorbikes and a clubhouse with 55 rooms is expected to be ready by the year end. The under construction structure, however, is making headlines yet again as the Gujarat Cricket Association vice-president Parimal Nathwani has tweeted the latest updates with the images of the under construction stadium.

“World’s Largest Cricket Stadium, larger than #Melbourne, is under construction at #Motera in #Ahmedabad,#Gujarat. Once completed the dream project of #GujaratCricketAssociation will become pride of entire India. Sharing glimpses of construction work under way. @BCCI @ICC #cricket,” read the tweet on Nathwani’s twitter handle @mpparimal.

World’s Largest Cricket Stadium, larger than #Melbourne, is under construction at #Motera in #Ahmedabad,#Gujarat. Once completed the dream project of #GujaratCricketAssociation will become pride of entire India. Sharing glimpses of construction work under way. @BCCI @ICC #cricket pic.twitter.com/WbeoCXNqRJ

In addition to the above Mumbai based Commercial Kitchen Consultants “Span Asia” have been hired to work with the architects and the construction company on all the F&B related areas such as the concession counters, main stadium kitchens, player kitchens, VIP boxes, VVIP boxes, corporate boxes, Press and media boxes, pantries and GCA Club.

There are also plans to create three practice grounds in the proximity of the stadium.

The old facility that is etched in cricket history as the venue where Sunil Gavaskar became the first batsman ever to score 10,000 Test runs, has hosted 12 Tests, 23 ODIs and 1 T20I before the expansion plans started in 2017.