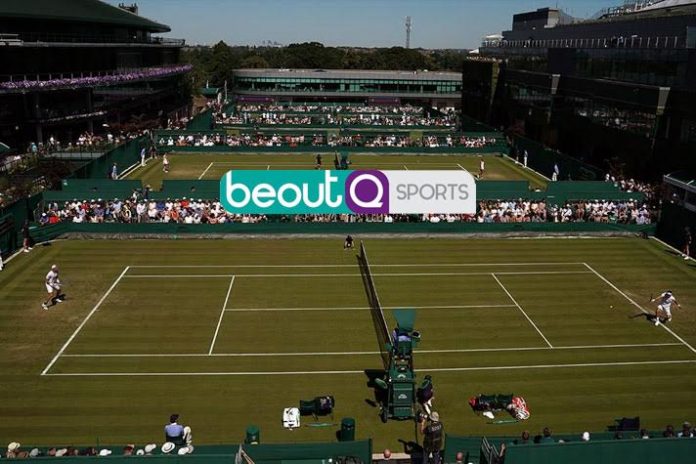 The world’s tennis governing bodies have joined forces to publicly condemn and call for the immediate closure of the illegal Saudi Arabian-based piracy operation, “beoutQ”.

Over the past year, a whole variety of world tennis content has been illegally broadcast across the Middle East and North Africa (MENA) region by a pirate television channel called beoutQ, which in turn distributes the content on the Riyadh-based satellite provider Arabsat, without any rights whatsoever to do so. The united voice of condemnation from world tennis joins the chorus of other world sports organisations that have been calling for Arabsat to stop facilitating the mass-scale piracy and for decisive action to be taken to stamp out beoutQ.

beIN MEDIA GROUP is the exclusive rights holder in the MENA region of major tennis tournaments, which are owned, operated, sanctioned or their rights sold by organisations across world tennis including the All England Lawn Tennis Club, the ATP World Tour, ATP Media, the Women’s Tennis Association, the United States Tennis Association, the French Tennis Federation, Tennis Australia; and it represents the global rights to the International Tennis Federation. It is these leading tennis organisations, extending to all four corners of world tennis, that have come together to denounce beoutQ.

Over the past 12 months beoutQ has been brazenly stealing the broadcast feeds of international tennis tournaments and distributing them illegally on a satellite provider called Arabsat. The premium sports content is then viewable on illegal beoutQ boxsets and online, in many cases for free across MENA. This mass-theft of tennis TV rights has prompted the world tennis organisations to come together to condemn and call for an immediate end to the illegal exploitation of its intellectual property.

Industrial-scale illegal piracy of this nature is of great concern as it risks significantly damaging the value of the commercial broadcast rights that tennis governing bodies and rights holders around the world rely on to fund the sport at a professional and amateur level. However, tennis is just one sport that is suffering at the hands of the piracy. Both FIFA and UEFA have issued statements in recent weeks denouncing beoutQ, joined by further condemnation from other sports, major broadcasters and rights holders around the world who have also had broadcast feeds and content stolen.

The case of beoutQ is especially troubling due to the unparalleled sophistication and the extensive period of time over which the commercial-scale theft has been allowed to continue.

Commenting on the unlawful use of its proprietary commercial rights Richard Lewis, Chief Executive of the AELTC said: “Wimbledon is a brand beloved by millions and the protection of our copyright is of the utmost importance to us. In MENA, the right to broadcast The Championships is exclusive to beIN SPORTS. We take the copyright infringement by beoutQ extremely seriously, and, alongside the other tennis governing bodies, we offer our support to beIN SPORTS as we look to protect our broadcast rights in the region.”

The allegations echo complaints last month from footballing bodies FIFA and UEFA who threatened to take action against beoutQ, which has broadcast every match of the World Cup so far despite not owning the rights to do so.

Global sports network beIN Sports holds the rights to broadcast major tennis tournaments and other sport events including the soccer World Cup in the Middle East and North Africa. It is unclear who owns or operates the channel and BeoutQ has never ever commented on the said allegations. But the government in Saudi Arabia has reacted to this persistent infringement in there territory by denying that beoutQ is based in the kingdom, and said that authorities are working to prevent beoutQ’s activities there.

Meanwhile the entire tennis administration has reacted to the piracy by BeoutQ.
Katrina Adams, Chairman of the Board and President of the United States Tennis Association (USTA) said: “beIN MEDIA GROUP is a key strategic partner of the USTA and we are truly disappointed by the flagrant and illegal piracy of our content taking place in Saudi Arabia and across the region through beoutQ and Arabsat. This is highly damaging for tennis and to the USTA’s mission of supporting the growth of tennis. We strongly oppose audiovisual fraud in all its forms and stand united with beIN in our desire to fight the harmful practices of illegal streaming and copyright infringement.”

Bernard Giudicelli, President of the French Tennis Federation (FFT) said: “beIN MEDIA GROUP has a strong track record of providing the very best tennis programming not only across the Middle East and North Africa, but also within France itself. As the exclusive rights holder for Roland-Garros in the MENA region, we fully support beIN MEDIA GROUP in taking action against illegal streaming in all relevant territories, and we are looking at all measures available to eradicate the unauthorized broadcast of our content by the Saudi-based illegal service.”

Craig Tiley, CEO and Tournament Director of Tennis Australia (TA) added: “Piracy is a major concern to all global rights holders, including Tennis Australia, because it risks corroding the value of the broadcast rights that we rely upon to fund our tournaments and grass roots initiatives designed to increase participation. beIN MEDIA GROUP is our rightful broadcast partner and the audacious piracy taking place in Saudi Arabia is setting an incredibly dangerous precedent. We will be providing all our support to beIN and relevant authorities as further attempts are made to stop beoutQ from operating.”

David Haggerty, President of the International Tennis Federation (ITF) concluded: “Broadcast rights are a primary source of funding for the future of tennis and are vital in helping the ITF and its member nations create the champions of tomorrow. As a global partner of beIN MEDIA GROUP, we request that the Saudi Arabian government and authorities use all their powers to close down beoutQ and to stop Arabsat from carrying this illegal broadcast of tennis’ intellectual property.”

Chris Kermode, ATP Executive Chairman & President said: “The protection of our broadcast rights is critical to the health of our sport. beoutQ is a pirate service which has not been granted any rights, via ATP or ATP Media (as the official broadcast arm of the ATP Tour), to broadcast any ATP World Tour content whatsoever – those rights belong to beIN MEDIA GROUP in the MENA region. ATP and ATP Media take copyright infringement extremely seriously and we stand firmly alongside beIN MEDIA GROUP as we look to protect our broadcast rights in the region.”

Steve Simon, Chairman & CEO of the Women’s Tennis Association (WTA) said: “Piracy is extremely damaging for all sports and entertainment property rightsholders. We work closely with our licensees to protect our content from illegal distribution. We fully support our licensee beIN MEDIA GROUP, and others in our industry, in their efforts to stamp out piracy for good.”