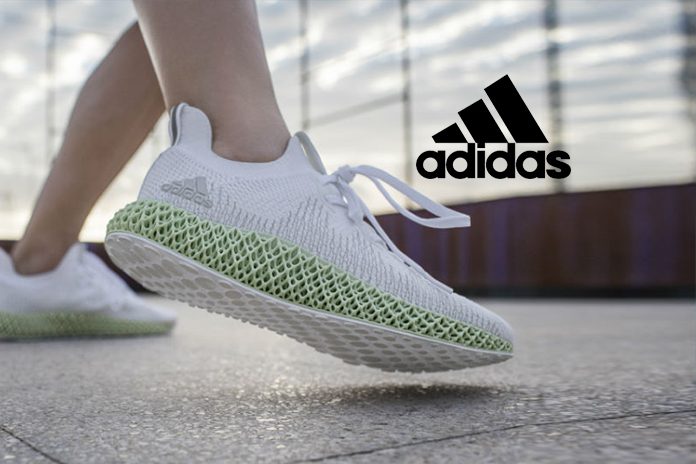 German footwear brand adidas is pushing boundaries of sports shoe technology with its Alphaedge 4D midsole. The space-agge Alphaedge 4D technology reportedly provides stability, support and energy to rebound where it is needed the most.

The latest 4D technology modern shoe is being presented as the blend of technology and art – for its confort and support factor and stunning looks. The adidas Alphaedge 4D is claimed to be an outcome of the adiddas philosophy of being at the forefront of sports shoe innovation by embracing technology in its products.

The midsole of the latest shoe dictates the durability of the shoe and comfort levels for the wearer. In a deviation from the EVA or polyurethane midsoles, the Alphaedge 4D features a geometric lattice structure as the midsole.

According to the company, the high-tech “Alphaedge 4D provides stability, support and energy return where it’s needed the most”.

This structuring starts with a print out. To deal with the tricky issue of bulk manufacturing, adidas has reportedly partnered with Carbon to mass produce the adidas 4D midsole for the Alphaedge 4D. Carbon prints the midsole using its proprietary Digital Light Synthesis technology that prints using light and oxygen. It uses digital light projection, oxygen-permeable optics and programmable liquid resins to print high performance durable polymeric products, claims the German footwear and sportswear brand.

Carbon claims that the new technology takes lesser time to print a sole – from hour and a half per sold by the prevailing method to as low as 20 minutes. The process works by using light from a custom high performance LED Light Engine to project a series of UV images to a cross section of the object that is printed. This causes the UV curable resin to partially cure in a precisely controlled manner.

HOW THE NEW TECHNOLOGY WORKS

There is also an oxygen-permeable window located between the LED Light Engine and the resin. This window allows oxygen to pass through, creating a thin liquid interface of uncured resin between the window and the object being printed. This is called the Dead Zone. Here, the oxygen prevents light from curing the resin located directly above the window. This allows the liquid to flow through uninterrupted and the part to be printed. However, at this stage, the part does not have the properties required from the final product. This is done by baking the part in a thermal bath or an oven. This causes a secondary chemical reaction, causing the material to strengthen and achieve the desired properties.

With the adidas 4D midsole inside the Alphaedge 4D, the German footwear brand has come with yet another game changer in research and development journey of sports shoes.