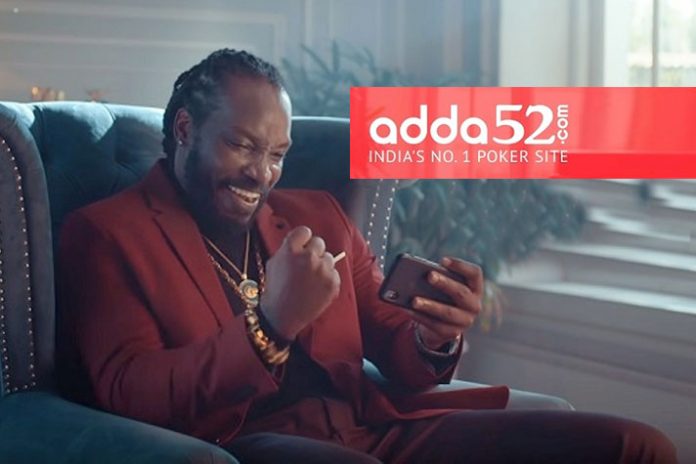 The campaign video highlights the uniqueness of the game with a key message that poker is a mind game that enhances mental skills; after all, intelligence is the true measure of wealth for an individual.

The campaign aims at building an intrigue around online poker and establish     poker game as an entertaining and thrilling game format, which constantly engages and tests a person’s mental agility.

Sharing his thoughts behind this campaign, Mohit Agarwal, CEO & Co-founder of Adda52.com said, “The user base playing poker in India is growing bigger with every passing day. While serious players have always liked the game for its intricacies, our aim is to make it appealing even to non-poker players. Poker is, after all, a skill game which helps in sharpening the mind, thus, benefiting all kind of users and that’s what we are emphasizing on in the campaign – #BanaoDimaagKoAmeer. This is the awareness we want to create among the intended audience.”

In the campaign, Chris Gayle plays the role of the brand’s voice to deliver the campaign message. The ad has taken a humor route. It has shown a young boy having bought an expensive “cosmic egg” and flaunting it to his father. That is when Chris Gayle enters and sends forward the message that bank balance is never the true measure of wealth, but one’s intelligence is. So, play poker on Adda52.com and #BanaoDimaagKoAmeer.

Gayle is excited to be a part of something so motivating and said, “There are very few organizations that work beyond the lines of making a profit. Adda52.com is one such poker giant that is helping build awareness around the game and highlighting its true benefits. It is great to be a part of this fascinating journey brought about by the Adda52 team.”

TBWA India, one of the country’s leading creative agencies has worked in collaboration with Adda52.com to conceptualize and build this campaign.

Sharing his views on the campaign, Antony Rajkumar, National Planning Director, TBWA said, “To bring scale to a game like Poker, we had to address and solve for the fact that Poker is a lot more than the limiting perception people carry. It is a game that calls for skill, agility, perseverance and control. It is right up there among the sports that prepares one for life’s real challenges. This is the narrative we went to work with.”

The exclusive campaign will resonate with both poker and non-poker players. The thought of true wealth is intelligence is a deeper insight that everyone in the poker community will agree with. #BanaoDimaagKoAmeer is a campaign that will transform the way the world perceives poker.

After Virat, it is Rahul who will serve Indian cricket for long: Gayle