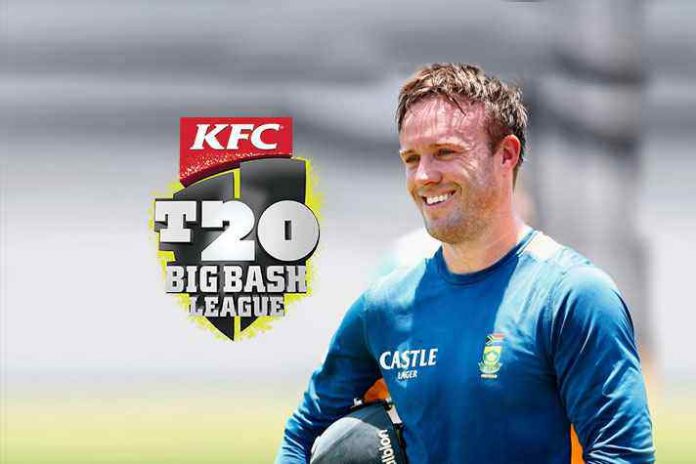 South African legend AB de Villiers has decided to pull out of the next edition of Big Bash League (BBL) after initially committing to play during the final phase of the tournament.

While Cricket Australia has decided to make it a 14-match league affair on a home-and-away basis, there is a possibility that a lot of big names will not be available for the better part of the tournament due to cramped international calender.

According to a report in ‘ESPNCricinfo’, De Villiers was willing to play for a “limited stretch towards its concluding stages” but has now turned his back after realising that both Cricket Australia and Big Bash League wanted maximum leverage from the Proteas legend’s participation and lift the dwindling TV ratings.

“Up to this point, CA, the clubs, and the broadcasters – Fox Sports and Seven – had appeared set to put together a package deal worth as much as 350,000 (AUD) to land De Villiers for a segment of the tournament, though there was a level of disquiet about how such a deal could be struck without an equitable system being in place for all clubs to secure big names,” cricinfo reported.

De Villiers’ presence is a necessity for BBL and CA because in January, some of the biggest Australian names will first be busy playing Test series against New Zealand and then travel to India for the ODI series.

“Something we’ve really been focusing on irrespective of the Australian team going to India, we’re buoyed by some conversations that some of the clubs are having and it’s been reported some of the big names potentially coming out,” CA’s head of events Anthony Everard had been quoted as saying by the website.

“The success of the BBL has always been predicated on a combination of marketable overseas players, some young up and coming stars and the foundation of the Australian domestic players,” he added.

All the top T20 freelancers like the West Indies’ Andre Russell may decide on bargaining for better deals considering that Australian board needs saleable names for sustaining the viewers’ interest.

“The recent rule changes have been implemented so clubs have the best opportunity to recruit overseas players among a cluttered global calendar.