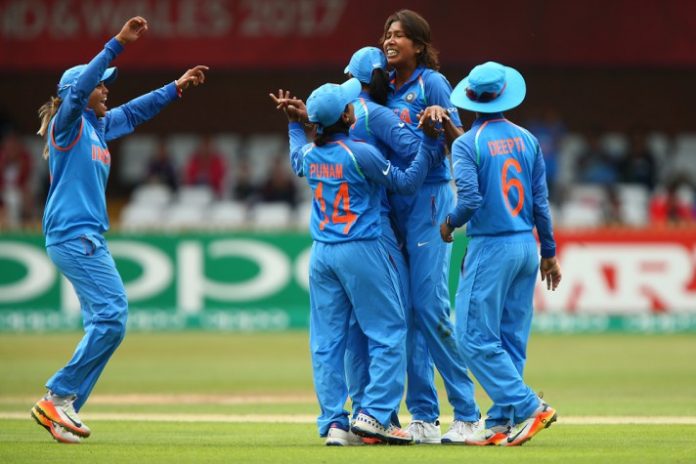 Punam Raut starred with the bat before spinners put up a fine performance to set up India’s comfortable 53-run win over West Indies in the second ICC Women’s Championship ODI.

India was able to defend a modest 191 by bowling out West Indies for 138 in 47.2 overs and level the three-match ODI series 1-1 here on Sunday night.

The spin troika of – left-arm orthodox Rajeshwari Gayakwad (2/27), leg-break specialist Poonam Yadav (2/26) and off-spinner Deepti Sharma (2/25) returned with two wickets each to restrict the hosts to a below-par score.

Opting to bat, India began on a shaky note with openers Priya Punia (5) and Jemimah Rodrigues (0) departing cheaply, leaving the side reeling at 17 for 2 in nine overs.

However, Punam (77), who was the top scorer for India, and skipper Mithali Raj (40) and vice-captain Harmanpreet Kaur (46) steadied the ship putting up a modest target on the board.

Punam and Mithali shared a 66-run stand, scoring four boundaries each before Sheneta Grimmond dismissed the latter in the 29th over.

Punam then joined forces with Harmanpreet. The duo kept the scoreboard moving with a 93-run partnership before the Indian vice-captain was bowled off an Aaliyah Alleyne delivery in the 48th over.

Chasing 192, West Indies got off to a bad start losing opener Stacy-Ann King (6) in the fourth over. The home side was struck with a major blow in the 25th over when opener Natasha McLean (15) retired hurt.

Captain Stafanie Taylor (20) then joined Shemaine Campbelle in the middle but was unable to lead her side to victory as she was caught in front of the wickets by Poonam Yadav.

The Indian bowlers led by the spin trio of Rajeshwari Gayakwad (2/27), Poonam Yadav (2/26) and Deepti Sharma (2/25), kept striking at regular intervals to deny West Indies of a substantial partnership.

Campbelle (39) top-scored for West Indies as the home side folded for 138 in the 48th over.

The two teams will face off again in the third ODI on Wednesday.

Read: Pak women’s tour of India can be cancelled